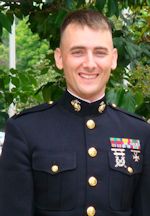 We’re looking for a FEW GOOD SPONSORS AND GOLFERS for the MCSF 11th Annual Capital Area Golf Tournament on September 29, 2014 at the Army Navy Country Club in Arlington, VA. The MCSF is a non-profit, tax exempt corporation of volunteer men and women, dedicated to providing financial assistance in the form of scholarships for higher education to deserving sons and daughters of United States Marines and Sailors who serve with Marines, and children of former Marines /Sailors, with particular attention being given to children whose parent was killed or wounded in action.

All proceeds from the 2014 Capital Area Golf Tournament will benefit the 3/5 “Darkhorse” Memorial Scholarship in memory of 1st Lt Robert Kelly.

The 2013 tournament raised over $200,000 for the foundation, setting an event record. We look forward to your support to setting a new record for our 2014 tournament.

We hope you can join us for this most worthy event and HONOR MARINES BY EDUCATING THEIR CHILDREN.

For more information visit the tournament website at www.mcsf.org/cag