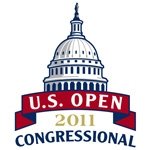 Well folks the US Open is in the Nation’s Capital this week and the excitement is clearly in the air. I spent a few hours out at Congressional Country Club on Monday to watch some practice rounds and I am headed back out there today (Thursday) to spend some time up close and personal with the best players on the planet. It looks like it is shaping up to be a great day and a great tournament.

There are so many story lines this week I don’t know where to begin. The battle for the #1 spot in the World Golf Rankings takes center stage today with Luke Donald, Lee Westwood and Martin Kaymer paired together for the 1st two rounds of the tournament. It still amazes me that Luke Donald is currently ranked no. 1 and seems to have come out of nowhere in doing so. Two victories this year (WGC Accenture Match Play Championship and the BMW PGA Championship) and another 8 top 10’s on the PGA Tour have vaulted him to the top spot.  At 5’ 9” and 160 pounds this diminutive Brit doesn’t intimidate the competition, but his flawless iron game and world-class short game will sure wear out his most worthy competitors. Lee Westwood is coming off some solid play himself, having recently lost to Donald in a playoff for the BMW PGA Championship recently held in England. He is sorely lacking that Major Championship in his resume and has come oh so close in several recent majors. Defending PGA champion Kaymer is a little off his game as of late due to some tinkering with his swing, but the laid back German obviously has the skill set to turn up the heat at critical times. It will be interesting to see how this group does over the first two days of competition at Congressional.

Another storyline this week is the absence of Americans in the winner’s circle of majors recently.  Charl Schwartzel, Martin Kaymer, Louis Oosthuizen and Graeme McDowell have all won the most recent majors along with the Europeans winning the Ryder Cup last fall. It is important for the Americans to win the US Open and let their presence be felt on the world golf stage once again. With Tiger Woods out of commission again and way off his game, it is wide open for at least a dozen or so Americans to take the mantle of “Best American Player”.  Several players eagerly pursuing that title include; Steve Stricker, Matt Kuchar, Bubba Watson, Dustin Johnson, Nick Watney and Hunter Mahan.

….and then there was Phil Mickelson. The #5 ranked player in the world has made it painfully obvious to me that he can’t get over the hump to become the number one player in the world during Tiger’s recent absence. He had many opportunities last year, as the world’s #2 player and consistently squandered them.  He also has five devastating 2nd place finishes at the US Open over his career and at 41 years of age must begin to take advantage of every chance he can get. Could this be his year, here in our nation’s capital to get the job done at the US Open and reestablish himself as the best player in the world. That would make for some exciting theatre come Sunday afternoon at Congressional.

Other Notables Players There are several other players (all major winners) in the field that could make a run, but are flying under the radar. I am listing them here for entertainment purposes only.

Ernie Els – He won the last US Open played at Congressional in 1997 and still has the game to get it done here.

Stewart Cink – The 2009 British Open champion is a perfect fit for this long Congressional CC layout. Can he get the putter working well enough this week to be a factor.

Retief Goosen – The two time US Open winner comes off of an impressive showing last week at the St. Jude’s Classic.

Angel “El Pato” Cabrera – With a Masters and a US Open under his belt the gregarious Argentinian knows how to handle the world’s biggest stages.

In the category of “What Have You Done For Me Lately” are two wickedly talented under-performers. Both Anthony Kim and Camilo Villegas burst onto the scene a few years ago with tremendous talent and promise and are both currently mired in horrible slumps. AK has a good track record here and Camilo played well last week for the 1st time in a while. Let’s hope these two young fan favorites can get their acts together this week.

The defending champion Graeme McDowell is also well off his best game in 2011. He made a splash at the TPC at Sawgrass recently, but was undone by a horrific final round on Sunday. Other than that the 2011 season has been a total washout. Can he get back on form and defend his title with another strong US Open showing?

And last, but certainly not least can Rory McIlroy shake off the stink of the almost major victory that was his  at this year’s Masters until a very untidy 43 on the back 9 on Sunday left him well out of contention.

Lots of story lines this week, but at the end there will be only one winner and a story to be told.