Potomac, Md. – Michael Putnam staked himself to a big lead early in the final round of the Mid-Atlantic Championship and then coasted to victory for the second straight week on the Web.com Tour. 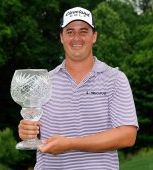 Putnam, who turned 30 on Saturday, shot a 2-under 68 at TPC Potomac at Avenel Farm and finished with a 7-under 273 total, two shots better than rookie Chesson Hadley (67).

“It’s the second week in a row and I can’t get used to it enough,” Putnam told the crowd at the trophy presentation.

The former Pepperdine All-America started the final round at 5-under and tied for the lead with playing partners Collins and Kang. Three birdie putts of 15, 10 and 12 feet on his first six holes separated Putnam from the pack.

“To pull away from the field early was big, especially with the windy conditions and knowing it was going to be a tough day,” said Putnam. “It was going to be tough to make any birdies today and to start off with three cemented the lead for a good while.”

Putnam got ahead of himself when he was up by four and staring at a four-foot birdie putt at number eight which would have stretched his lead to five strokes.

“My mind started racing thinking about my family and what I was going to do with the win and a bunch of other stuff,” he said. “Then I missed it. I knew there were a bunch of tough holes ahead and I caught myself. I tried not to exhale the rest of the back nine.”

With his lead at four and the TPC course showing its teeth once again – the four-day scoring average for the par-70 layout was 72.631 – Putnam took his foot off the gas pedal.

“If you get aggressive on this golf course it’s real easy to make bogeys. There are penalties everywhere,” he said. “I was aiming towards the middle of the greens having 20 footers for birdie.”

Putnam didn’t make many but then neither did anyone else. The only one applying any pressure was Hadley, who closed to within two a couple times but could get no closer.

“I’m glad it didn’t catch up to me and nobody made birdies to catch up to me,” said Putnam. “It’s hard to make three or four birdies in the last five or six holes. I knew if I made some pars I’d probably be the winner.”

Putnam will have to put both his birthday and victory celebration on hold until Tuesday. He will be joining 121 other competitors in Monday’s 36-hole U.S. Open Sectional Qualifying at Woodmont Country Club in nearby Rockville, MD.