Will 2012 be the year that Tiger Woods get back on track to catching Jack? 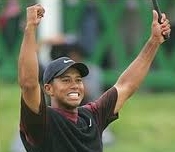 2011 ended with an improved Tiger and now he says he healthy.  So will he start collecting majors again this year?  And is time still on his side?

Even if he never returns to his superhuman golf form of 2008 he still is one of the top golfers on the tour.  And being only in his 30s he still has plenty of time to make his run.  Remember, Nicklaus was donning the green jacket at age 46.

I recently ran across an interesting blog post from Ken Pomerory making the statistical case for Tiger.  If you’re a fan of college basketball stats you may be familiar with Mr. Pomeroy for his kenpom.com website.

Here’s a link to his blog post “The case for Tiger Woods“.

If a strong finish in 2011 is any indicator of what to expect in 2012, then Tiger made his case at the end of the year.

Fred Couples made the decision to make Tiger a Captains Pick for The Presidents Cup.  A controversial choice, perhaps, but definitely good for TV ratings if not the team.  And he played well, closing out Baddeley (4 and 3), in the match that clinched the cup.

In November Tiger went out to the 36-hole lead at the Australian Open.  A tough 3rd round took him seemingly out of contention but he had a strong final round and eventually finished third.

Finally, one shot down with two holes to play, Tiger birdied the last two holes to top Zach Johnson at the Chevron World Challenge.  Even though this was just 18 players competing in a showcase event, Tiger seemed more like the Tiger of old.

Since the Chevron there was a Tiger siting at the Fiesta Bowl on January 2nd when he served as Stanford’s honorary captain in the Cardinal’s overtime loss.  But his first golf appearance on the 2012 PGA Tour will be at the AT&T Pebble Beach National Pro-Am, February. 9th.

Tiger recently turned 36 and has the same number of majors as Jack at that age.  So it will be interesting to see what kind of run he will make over the next several years.

Whatever 2012 brings it should be fun to watch. Enjoy the show!