I received this tidbit of trivia in an email this week.  And after some research it appears to be plausible. 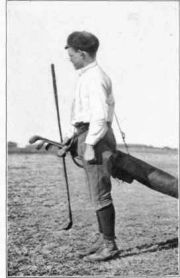 Q: In golf, where did the term “Caddie” come from?

A: When Mary, later Queen of Scots, went to France as a young girl (for education & survival), Louis, King of France, learned that she loved the Scot game “golf.” So he had the first golf course outside of Scotland built for her enjoyment. To make sure she was properly chaperoned (and guarded) while she played, Louis hired cadets from a military school to accompany her. Mary liked the concept a lot and when she returned to Scotland (not a very good idea in the long run), she took the practice with her. In French, the word cadet is pronounced ‘ca- day’ and the Scots changed it into “caddie.”

One of the most enjoyable days of golf I ever had was at Bulle Rock.  It was a beautiful spring day, we took caddies and walked the course.

Another time, I played at a course in Bangkok, Thailand and there each golfer had three caddies.  One to carry your clubs, one to carry an umbrella for shade while you walked, and one to fetch drinks, snacks, more balls or whatever you needed.  At first it was strangely uncomfortable but by the back nine I learned to embrace it.  I never once touched my ball that entire round.

There are not many options for taking caddies at public golf courses here in the Mid-Atlantic.  But if you’ve never done it – you should give it a try.