Did you qualify to play in the U.S. Open this year? If so… congrats and good luck taming those final five holes at Merion!

But if not… you can still make it seem like you’re golfing in a major by heading to Renditions Golf Course in Davidsonville, Maryland.

Renditions features replica holes from the most famous major golf tournament moments including the 11th hole at Merion. 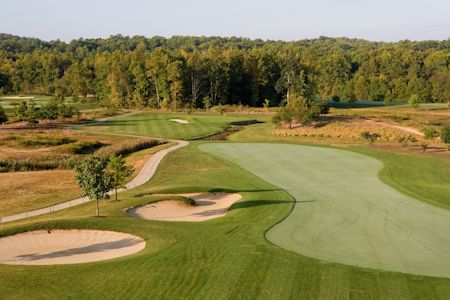 Merion Golf Club in Pennsylvania is the site of Bobby Jones’ first and last national championship appearances. By 1930, Jones was the world’s greatest golfer and the most popular athlete in America. He had already won that year’s British Amateur, British Open and U.S. Open and came to the U.S. Amateur at Merion looking to become the first player to complete the Grand Slam. Under intense pressure, he never trailed in any of his matches and closed out Gene Homans in the 36-hole final, 8 and 7 on Merion’s 11th hole. Two months later, at the age of 28, Bobby Jones retired from competition and redirected his immense talents into a new endeavor, the development of the Augusta National Golf Club.

Friday Saturday and Sunday
$79.00 Plus Tax

After your round of golf be sure to stop in the clubhouse for a cold one and the day’s U.S. Open coverage on Renditions’ big screen TVs.

Will Simpson repeat his U.S. Open victory or will one of the big three (Tiger Woods, Adam Scott and Rory McIlroy) step up and win this year? We don’t have the answer for that but we do know you’ll feel like a winner with a round at Renditions.

Renditions also has the following demo days this weekend…