Our good buddy (actually it’s the first time I met him but now he’s my good buddy) Charlie invited Bogeyman and I to play the “newly renovated” Queenstown Harbor River Course on the hottest day of the year.  He, no doubt, planned it that way in a vain attempt to take down Team-Waggle!

We teed off around 9am and it was only about 87 or so then with a slight breeze and even though temps eventually reached 100, except for the last 3 holes, we weren’t too awfully hot.  It seems like there is always a breeze at Queenstown so don’t be scared off by the heat!

Now about this fabulous course!  As a prelude to our thoughts, late in the round, Bogeyman I were pontificating and trying to think of a more enjoyable, challenging and scenic course as well as one that was in better shape than Queenstown was on this day.  I gotta tell you, we didn’t come up with many so if you know of one, let us know and we’ll check it out!

Charlie who has intimate knowledge of this track, told us that the #1 green was moved to the location of the historic Henry Corsi House who was famous for something or other…hey we were golfing and I couldn’t capture every note, but I think they owned a bunch of properties in the area.  The hole is essentially the same as before but the green is slightly to the right of the original location.  In any event, it’s a challenging opening hole with water coming into play on the right side of the fairway – and closer than you may think so keep it left (but don’t hit into the fairway bunker)…are you getting a picture of the overall course challenge here?

The par 3 hole #2 is one of the ones that had a major renovation.  When you get to the hole, you might think, “it’s the same

hole it used to be” as it DOES look the same.  But upon closer inspection, the entire hole has actually been relocated 200 feet closer to the water and the cart path actually is on the other side of the “fairway”.  The view of the water is much prettier and you can also see the water through the trees when looking at the green from the tee.

Charlie went on to tell us that the reason for the renovation was because of an additional review of Maryland Zoning laws (or something like that) from the 1980’s by Queen Anne’s county that decreased the allowable distance from 300′ to 100′ for critical area buffers.  In other words, these holes were 300′ from the water, but the change in the law permitted them to move them to 100′ of the water with NO damage to the environment but a MUCH nicer view and better golf hole!  Nice work Queenstown!

Holes 3 and 4 are essentially the same par 4’s.  #3, a tough dogleg left and #4 a short and tricky dogleg right over water.  No fear, Bogeyman and Lefty pulled out the big stick on hole number 4 and impressed our hosts by driving over the water and nearly on the green.  For those of you that know this hole, those drives represents a forced carry of about 380 yards.  (…well or maybe not quite that far but it was far…trust me!). 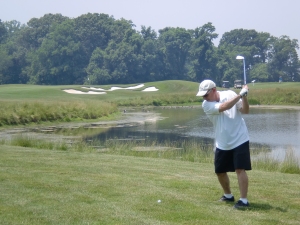 So on to #5 which is the other hole that was relocated closer to the water.  It’s a fairly long uphill par 5 which was further lengthened by the renovation.  The green is farther back and more “left” than prior and definitely makes the hole more of a challenge.  I believe Charlie must have had something to do with the final design while he was spending time in an Irish prison, as this hole certainly reminded us holes we’ve seen on the British Open!

The remainder of the course is essentially the same and you will cross many bridges and have a chance to see many beautiful views on the River Course.  It provides a true test of golf and the heat did get to us, but we managed to finish in one piece and unharmed.  The outstanding friendly service and cold beverages in the clubhouse certainly made a nice finish to this round of golf.

I took a quick look around at the well stocked clubhouse as well and they offered some good deals on golf stuff.  And as you ALL know, you can’t have enough golf stuff!  Check out the newly renovated River Course at Queenstown Harbor and let us know what you think!