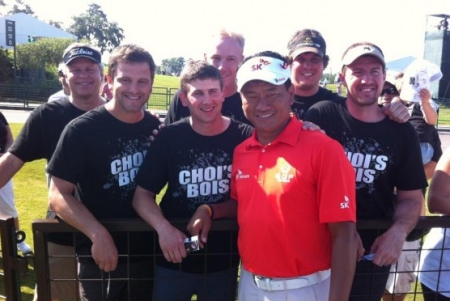 Congratulations to KJ Choi (Shown above with his fan club – The Choi’s Bois) on his HUGE win at TPC Sawgrass this past weekend. By winning the 2011 Tournament Players Championship, he has reestablished himself as one of the best players in the world to never win a Major.  I do not and will not ever consider the Tournament Players Championship to be the 5th major.  I hope Tim Finchem is reading this. Nonetheless it was a fantastic victory for Choi and his giant putter grip.

The tournament was in my opinion one of the best of the year and the dramatic ending created great theatre. The obvious disappointment of David Toms was palpable. After a fantastic birdie on 18 to forge a tie and force a sudden death playoff, Tom’s hit a terrific shot on the 1st playoff hole (The island green 17th hole) only to miss a 3-footer for par.  How many times will Tom’s think about the ill-fated 2nd shot he attempted at #16 during regulation play that found a watery grave and cost him the tournament outright.

There were many contenders coming into Sundays round that seemed poised for the win and up for the challenge. They all fell along the wayside including McDowell, Watney, Goydos, Glover and several others that came up short on one of the golf world’s biggest stages.

Lucas Glover and his now famous beard made a run at the title after a 1st round 65. He got it to -11 on Sunday before collapsing under the enormous weight of the beard and finishing at -2. The article below details Glover’s new found look and the life of its own the Beard has taken on.

First there was the Dustin Johnson debacle that handed GMAC the US Open last year at Pebble Beach. Then there was the more recent Rory McIlroy mega-meltdown at Augusta last month that was painful to watch.

Graeme McDowell can now be added to the list of Sunday meltdowns that have plagued some of the world’s best players recently. His poor play began on the 6th hole after canning a monster putt on the 5th to retake a share of the lead at -13. His army golf (left/right/left/right) the rest of the way and poor shot-making reminded me, of well, me. I was actually surprised when the scorecard was added up and read only 79. I thought he shot much worse than that. They say he’s a real tough character mentally so we will see where his head is at come June and the US Open at Congressional where he is the defending champion.